Here’s a video from today.com that nicely summarizes some recent personal drones news:

Visit NBCNews.com for breaking news, world news, and news about the economy

A recent episode is raising concerns about the issue of personal drones and the protection of privacy.

As reported in this article from the Washington Times, while some protestors were manifesting outside her house, US Senator Dianne Feinstein spotted a drone, right outside her window, staring a her. We see how this must have been a terrifying experience.

“I went to the window to peek out and see who was there, and there was a drone right there at the window, looking out at me” the senator said.

For a specialized blog such as Personal Drones, it is of interest to ascertain which kind of drone was used to spy on Senator Feinstein’s privacy.

Was it a predator drone?

Or maybe an octocopter equipped with a big camera?

END_OF_DOCUMENT_TOKEN_TO_BE_REPLACED

Local 6 found a drone that was hovering over central Florida and then crashed on the ground. It appears to be a DJI F330 quadcopter with a NAZA flight controller with GPS.

The quadcopter had a camera GoPro attached to it apparently with generous footage inside. This provided clues on the flight activities of the quadcopter and, as it happens, on the actual owner of the quad.

The video below reports this interesting story by Local 6 and some examples of the footage recorded from the quadcopter.

The video features an interview with the pilot, who comes out as a nice guy passionated with multirotors. In short, one of us. He explains that his only purpose was to take some nice footage to upload on youtube. Local 6 in my opinion is “pumping” an otherwise ordinary quadcopter crash to make a story out of it and point a big accusative finger on personal drones, as if they were mainly used for voyeuristic purposes, which indeed is not the case.

Using a quadcopter with such purposes, by the way, is not that easy. They are quite noisy by nature, not so discreet, and the carried cameras are in most cases wide angle cameras not really good for taking footage with voyeuristic interest. Not that this could not be done in principle, by selecting particular gear for the video footage, but it is technically far more complicated than it might seem to an inexperienced average person expressing his opinions on the matter. Hopefuly reports like the Local 6 above will not lead to issuing over-restrictive legislation on our nice hobby whose main purpose is to have fun and take some special video from an original perspective.

Check out the original article at clickorlando

Marseille Police chief Jen-Paul Bonnetain is pushing the idea of using drone based aerial surveillance to aid law enforcement and police investigations. The idea is strongly supported by socialist politician Eugène Castelli, who is ready to propose investments for millions of euros in the project.

Will Marseille become a test ground for a wider aerial surveillance program in France? Are we entering a science fiction era in which multicopters and personal, or less personal drones will be part of our everyday life? 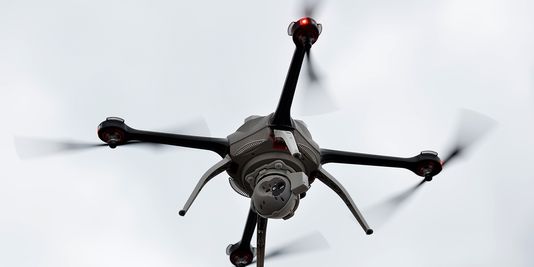