I’d like to report on my latest build in the quest for the perfect mini personal drone. Like the mini H quad and the mini quad for FPV builds, this is again a small quadcopter, that should be possibly slightly smaller than the last one.

I started from an EcksFibre 230mm frame as a template. The main goal is to modify the design so as to include extension plates for a mobius camera and an immersion RC 600mW video transmitter, for First Person View flight.

END_OF_DOCUMENT_TOKEN_TO_BE_REPLACED

I’d like to report here some details of my last personal drone build, a mini quadcopter for First Person View (FPV) flight.

Size: The 4 motor centers form a square with a side of 17,5 cm and a diagonal distance from front motor to back motor of 25 cm.  So the quad is in the 250 class. END_OF_DOCUMENT_TOKEN_TO_BE_REPLACED

As it happens, care to details and sometimes the use of some dedicated, although simple and inexpensive devices can go a long way in protecting your expensive equipment. One piece of delicate equipment used in RC models, and in particular for FPV, are indeed video cameras, with their exposed lens.

We have been discussing the setup of the Mobius camera for FPV in a previous post. Since then, a nice new model with wide angle lens came out:

This is even better than the original version as for FPV it is great to have an as wide field of view as possible.

The wide angle lens is however somewhat bulky and protrudes prominently from the camera body. In the event of a collision, the lens will make for a great shock absorber for your multirotor, especially if the camera if mounted on the front of the aircraft, as it usually happens.  But of course you see the point here: chances of damaging the precious optical element are significant.

There comes to the rescue a great, lightweight, little custom piece of equipment designed by Bo Lorenzen (check out his Blog at FPVGuy.com) as a shock absorber / lens saver to protect the lens of the wide angle Mobius camera.

I tried it and it is a perfect fit. Once in place the piece will grip strongly to the camera. A little pressure on the two little “wings” will release grip and allow a smooth removal.

The mobius wide angle lens protector is described here and can be ordered from Shapeways. It is made with a 3D printer from the original Bo Lorenzen design.

At 7$ + shipping this little accessory simply cannot be missed if you use a wide angle Mobius camera for FPV.

The Mobius camera is the big brother of the 808 camera. It features 1080HD quality, a wide angle lens, easy of use, light weight, storage on SD card. I recently got one and decided to try an FPV setup by using this camera together with a Fat Shark Immersion 250mW 5.8GHz video transmitter.

Since it took me a little while to figure out how to establish a correct cable connection between the camera and the transmitter, I thought I would share here how I did it, it’s an easy and quick FPV setup.

First let’s have a look at the immersion style cable that comes with the transmitter:

In this little tutorial we will limit ourselves to connect the video component only, constituted by two wires: the video wire (yellow) and the ground (gnd) wire (black). However, by following a similar approach, it is easy to also hook up the audio and power wires, so as to provide power to the camera directly from the battery of the aircraft.

This is the transmitter cable connected to the Fat Shark video transmitter:

For the mobius camera

it is easy to buy a special usb cable for video and audio out and power in. It looks like this:

The mobius cables set (optional purchase) not only includes the usb video out cable (photo above) but also an RCA video cable that can be connected to the video connector of the usb cable. It looks like this:

In the cable in the photo above the video wire is white. I actually used a very similar cable in which the wire is yellow instead.

What we will do is to cut out the connector from the video cable and solder it to the corresponding cables on the video transmitter cable. Here’s the final result: 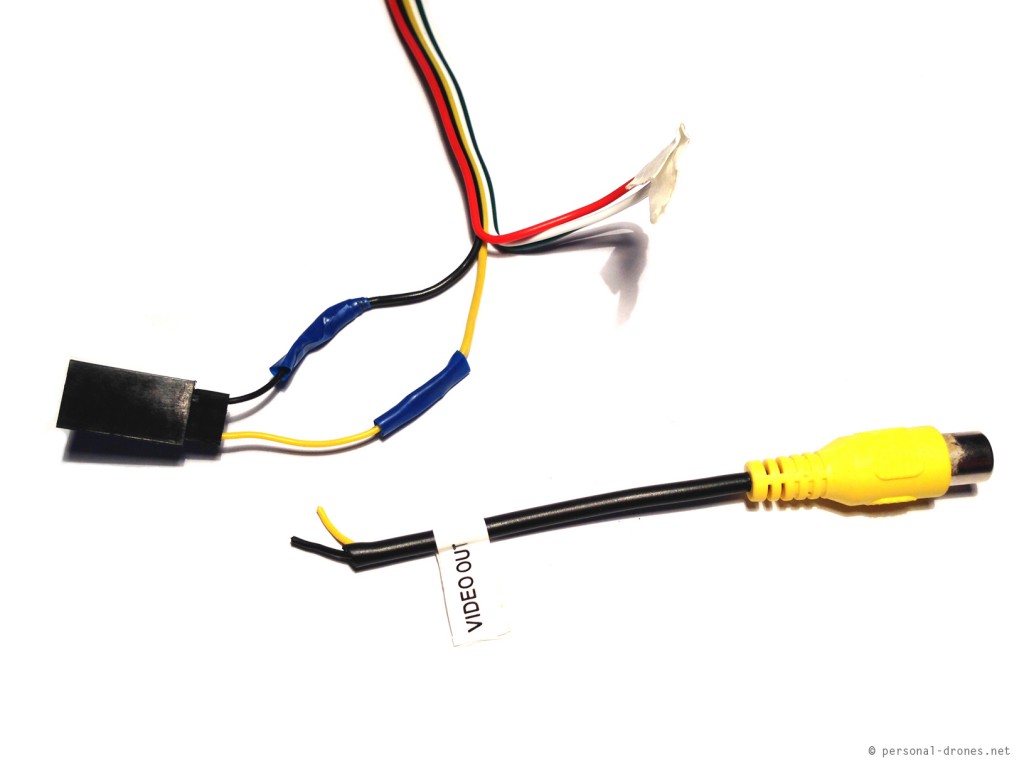 This is the final complete FPV setup:

This is a first test mount of this setup on a Lotus RC T380 quadcopter.

Questions or comments most welcome.

Here’s a picture in which the power wires were connected along the video signal wires. In this case the wires from the mobius video cable were soldered directly to the wires of the molex, with no connectors in between: