I have received a nice USPS box from Danny, funder of the Quadlugs multirotor modular system and started a build with the main purpose of testing this original piece of technological equipment for strengths and weaknesses, report to our blog readers and providing a build blueprint for others that might want to built their own Quadlugs based multi rotor.

Since the idea of a system based on a number of small pieces that can more or less freely assembled to create different machines is starting to be seen around, for example in the new RotorBits frames available at Hobbyking, we will also shortly discuss quadlugs in comparison to RotorBits as there are a few key differences that are worth highlighting.

The build process is different from other “classic” frame systems, such as the DJI F450 or F550 and many others, so I will go through all the assembly steps, in pictures, to let you have a close look at what you can expect if you decide to build one yourself, and possibly provide some inspiration for your own creative build.

Indeed, as I have appreciated during the building process, Quadlugs is, or can be very much about personal creativity. When you build a DJI F450 frame, you pretty much exactly know where you will end up. Of course, no F450 build are alike, especially when equipment is added outside the standard DJI equipment, and lots of decisions can be made to customize an F450 build. However the very basic structure of the frame is “fixed”. You position the arms within the two center plates, tighten the screws, and this is it. The shape of the frame is pre-determined by DJI, you can’t really do much about it, unless of course you start to build custom pieces etc.. but this is not for everyone, with such a “rigid” system”.

Not so with Quadlugs. Of course you can get a “standard” wood pieces set from Quadlugs, I actually recommend you do to start with, and build a “standard” version. However since all frame parts except the lugs are made of wood, and have a quite simple design, squares, rectangles, the kind of simple pieces anyone, even with no special wood crafting experience, can build easily with simple tools. So once you get familiar with the system, you can so easily shape it to your own custom needs, by just sourcing a few new pieces of wood. Simple, inexpensive, rewarding and fun. A full DIY experience, if you wish. Otherwise you can just stick to the default frame kit and still enjoy a custom build by making some decisions, as I have done for my own build described here.

Mind that you can click on the pictures on this article to view them full size, they are much bigger and informative than the thumbnails that you see here!

Enough talking for now, let’s go to the solid stuff.

Before we get into the build itself, let’s briefly introduce the lugs, the main components of the Quadlugs system, and how they we can fit them together with the wood components in order to build the quadcopter. 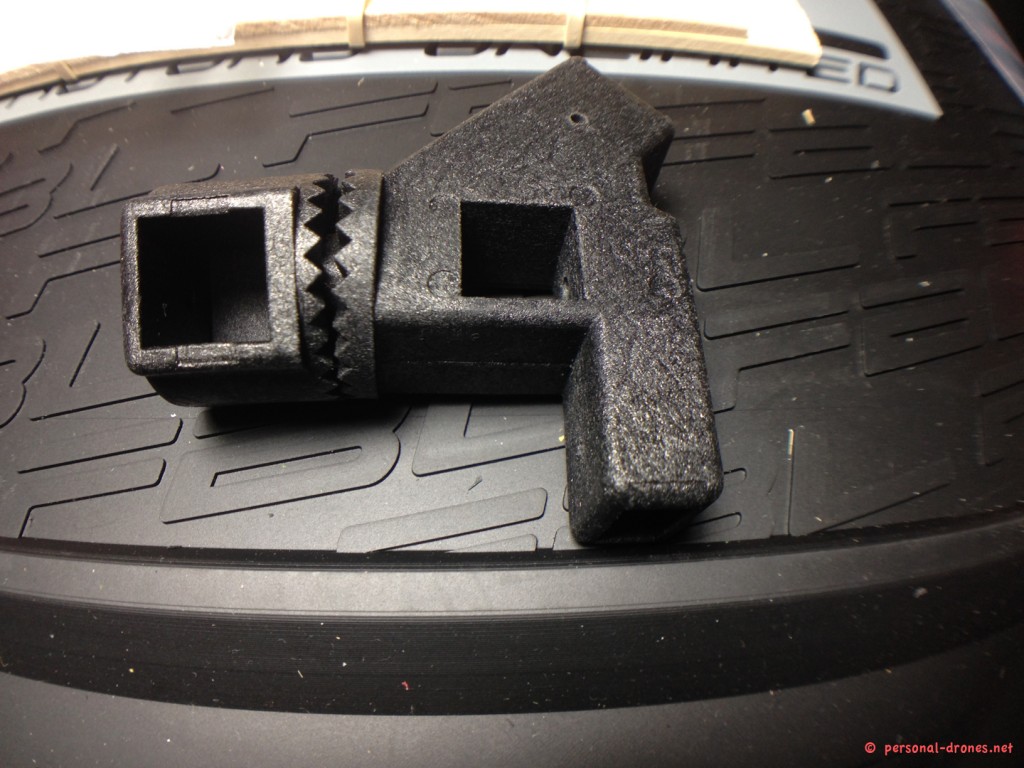 Quadlugs arm lug. This are sturdy pieces made of nylon and are especially robust. The other lugs are made of ABS plastic. See how the head can be rotated in 15 degrees increments with respect to the base. This is an AMAZING and unique feature that allows the angles of the 4 arms to be customized at will, and so easily changed at any time, to experiment new configurations. Arms angles can have a strong impact on flight characteristics and the Quadlugs platform, thanks to this special feature of the arm lugs, is just a few screwdrivers turns away from experimentation in this area.

So now you should start to have a first rough idea of what the lugs are and how they fit into the scheme. Let’s now make a step back and look at the details related to the assembly of a Quadlugs system from the very beginning, as there are a few operations to be carried out before the actual frame assembly.

We can divide the build in 3 main “sections”.

First, some parts will need a little bit of drilling. Not an experienced driller? No worries, you are like me then. All you need is a drill and correctly sized drill bits and you can’t really go wrong. Also, a good old fashioned manual gimlet can be very hand to pre mark holes positions, to better center them with the drill bit later on, nice tool to have at hand during the bild.

There are a total of 4 holes, at minimum (found myself drilling a few more during the build) that we need to drill. 3 on each arm lug, and one on the bottom of the motor plates, to allow screwing those to the arms. Let’s start with the 3 holes on the arms lugs.

For this hole, I found that the best bit size is 3, see the bits picture above. It basically closely fit the available home in the top part of the arm lug where the bit is inserted. In the figure above a 2.5 is portrayed. This is before I found out that 3 is better, as it leaves less room for wrong drilling angles and facilitates going straight down. There is always some room for a slightly bad drilling angle here, so I suggest you perform this operation carefully and not not rally go deep until you are sure you are getting the angle right. A lug with this first hole drilled (and also the second hole) is shown in the picture below.

Hole 2 can be drilled with bit size 2. It is pretty much straightforward.

For hole 3 there is not a precise guide. It serves as insertion point for the screw that fixes the landing gear leg into each arm lug.

For this third hole, you have the option drilling it on either side of the lug . This is where a screw will go and you can decide if you want these leg screws on the inside, facing each other, or maybe on the outside. So before drilling those, do a simulation of frame mounting ad pick up the right side for the hole on each of the 4 pieces.

Hole 4 is to be drilled with bit size 2 on the bottom of the motor plates. Since the correct position to drill is already marked by a light depression, you can’t miss it:

Now that we have drilled the plates, we are ready for the actual frame assembly, that will be covered in great detail in part 2 of this review, please stay tuned on the blog for the follow up of this article, to come during the next few days.

In the meanwhile make sure you check out the Quadlugs web site and the Quadlugs build videos, that are very rich in details and provide step by step build instructions for the Quadlug system.